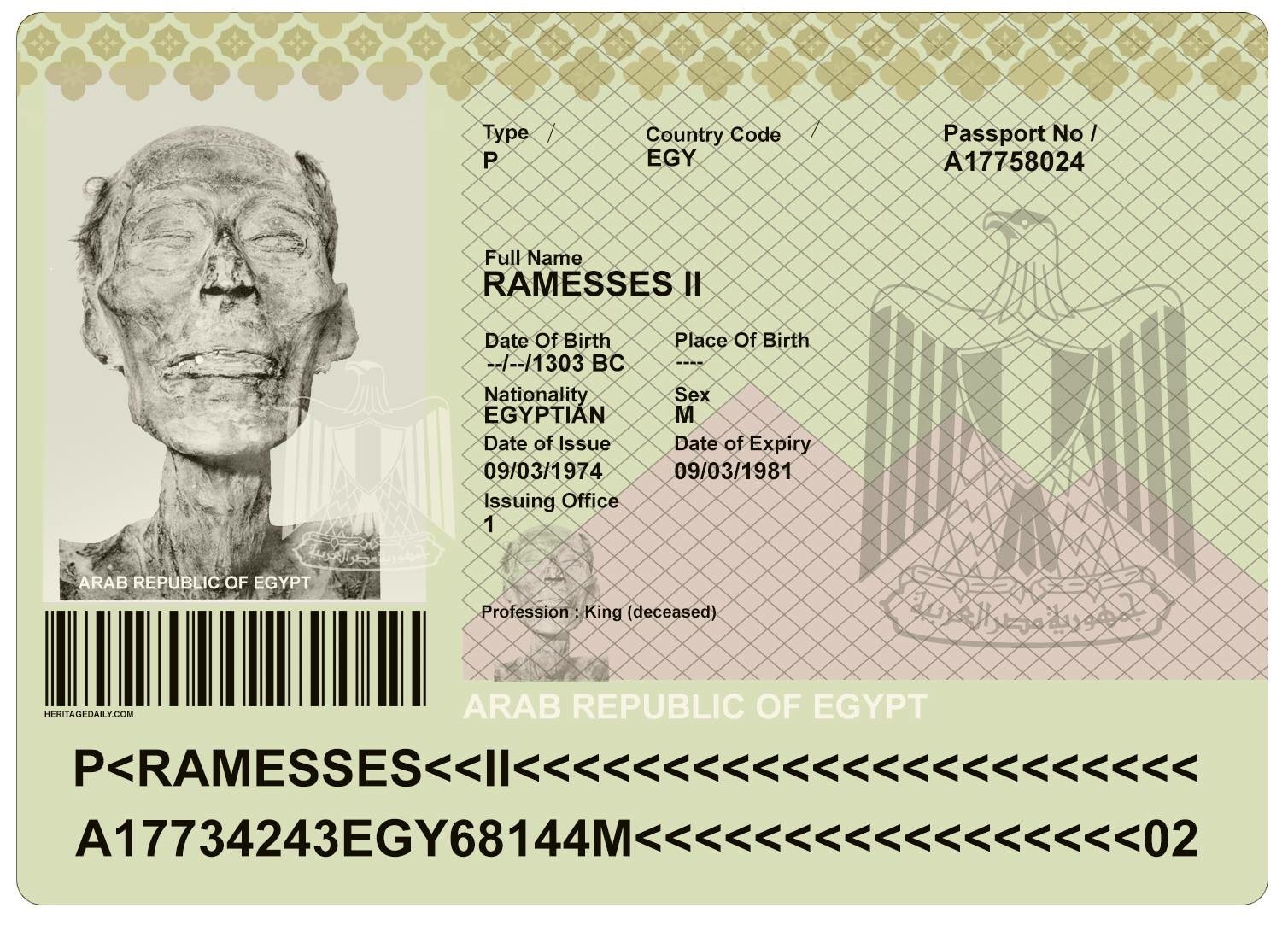 Amazing story for the Pharaoh mummy:

The only person in the world who made a passport three thousand years after his death.
Pharaoh’s passport was made in 1974 because some repair was to be done in France to protect Pharaoh’s slogan. And the passport slogan in France could not be entered, so Pharaoh’s passport was created
It was given presidential protocol during the treatment of France, and the helicopter was also carried out in the airspace of Paris City.

When Francisco Mitra became the president of France in 1981, France requested from the Egyptian government to host the mummy of Pharaoh. For the purpose of running laboratory and archeological examinations on the mummy of the most notorious dictator ever lived on earth. Upon arrival, very royal attendants were there including the French president himself and all ministers who bowed in honor for the Firaun Mummy.

When the ceremony ended, the mummy was carried to a specially-designed section at the Archeology Centre of France. Were it started to be tested by the greatest French archeological and anatomical scientists in order to discover more about such a great Firaun Mummy.

Note: The picture shown above is the dead body of Ramses II, the Egyptian King in the era of Prophet Moses (pbuh). Its age is approximately 3000 years old and it was found by the Red Sea, at the place called Jabalain, and is now on display in the Royal Mummies Chamber of the Egyptian Museum in Cairo.

And there, someone whispered to him that Muslims claim to know something about the drowning of this mummy. Yet Professor Maurice Bucaille firmly denied such thing saying that it’s impossible to discover this without the development of science and without using his high-tech and complicated laboratories and computers.

To his surprise, he was told that Muslims believe in a book called “Holy Quran” and this Holy Quran narrates the story of Pharaoh’s drowning and ensures the safety of his body after his death as to be a Sign to mankind.

Professor Maurice Bucaille couldn’t believe his own ears and started to wonder: How can a book existed 1400 years ago speak about the mummy that was only found 111 years ago, in 1898? How can that be possible while the ancient Egyptian heritage was discovered only a few decades ago and no one knew about it before?

Professor Maurice Bucaille sat down pondering on what he was told about the book of Muslims, Holy Quran while his Holy Book (The Bible) narrates only the drowning of Pharaoh without saying anything about his body.

Professor Maurice Bucaille couldn’t sleep that night till they brought him the Old Testament where he read: “And the waters returned, and covered the chariots, and the horsemen, and all the host of Pharaoh that came into the sea after them; there remained not so much as one of them. (Exodus 14:28) But overthrew Pharaoh and his host in the Red sea: for his mercy endureth for ever. (Psalm 136:15) For the horse of Pharaoh went in with his chariots and with his horsemen into the sea, and the LORD brought again the waters of the sea upon them; but the Children of Israel went on dry land in the midst of the sea. (Exodus 15:19)”

Professor Maurice Bucaille was surprised that the Holy Book (The Bible) didn’t mention about the destiny of the body and that it will be saved.

When the scientists were done with the mummy, France retuned it to Egypt, but Professor Maurice Bucaille couldn’t rest for a moment since he was told that Muslims know about the safety of the body from Holy Quran. So, he decided to travel and meet anatomy Muslim scientists and there he spoke about his discovery of the safety of the mummy after its death in the sea and so on.

One of the Muslim scientists stood up and simply opened Holy Quran and pointed to the Professor at one verse: “We brought the Children of Israel across the sea and Pharaoh and his troops pursued them out of tyranny and enmity. Then, when he was on the point of drowning, he (Pharaoh) said, I believe that there is no god but Him in whom the Children of Israel believe. I am of those who submit (to Allah in Islam). What! Now! And indeed you disobeyed before and you were of the mischief-makers. This day shall We save you in your body, that you may be a Sign to those who come after you! But verily, many among mankind are neglectful of Our Signs.” (Holy Quran 10:90-92)