Saudi Arabia has announced it will allow holders of seven types of visas to perform Umrah for the new season, local media reported. 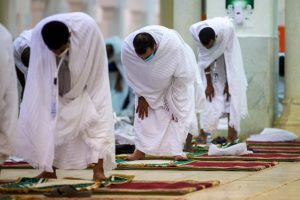 Those coming to perform Umrah can obtain an Umrah visa and choose a package of services through the “Maqam” platform via the link: https://maqam.gds.haj.gov.sa

Umrah visas can also be issued directly through the unified national visa platform, via the link: https://visa.mofa.gov.sa/

The Ministry of Hajj and Umrah said that all pilgrims are required to book an appointment for Umrah through the “Eatmarna” app. In order to keep the appointment, they will have to arrive in the kingdom no less than 6 hours before the scheduled time. In the event of flight delays, the appointment is automatically cancelled.

The ministry clarified that if the Umrah permit was booked and the pilgrim was unable to attend from within the kingdom, he/she would be allowed to book a new appointment immediately once the permit expires, and if he/she wants to change the date, they can do so four hours before the scheduled appointment and re-book a new permit.

Umrah is a pilgrimage that Muslims can complete by visiting the holy city of Mecca in Saudi Arabia and performing a series of religious rituals. The journey is open to all Muslims worldwide.

How we can apply for Umrah Visa Package online