Some events also occur in this month such as the beginning of Hajj, Eid ul Adha, Day of Arafah etc.

The main reason as to why these first 10 days are so important:

“This day I have perfected for you, your religion and completed my favor upon you and have approved for you Islam as religion.” (Quran 5:3)

A narration by Abu Hurairah (RA), one of the companions of the Prophet (SAW), says that:

The day of Arafah takes place on the 9th of Dhul Hijja. This is the second day of the Hajj pilgrimage, and after this day Eid ul Adha takes place. Some Muslims view this day as the best day of the year.

“Fasting on the day of Arafah is an expiation (of sins) for two years, the year preceding it and the year following it” (Ibn Majah)

On the 10th of Dhul Hijja, Eid al Adha is celebrated. 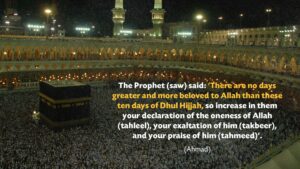 Here are some tips so we can all make the most of these blessed days:

Reading the Qur’an is a good deed and Allah (swt) especially loves the good deeds done in these days. Read as much as you can, even if it is a few verses each day.

There are a number of extra prayers you can observe during the day to increase your worship and good deeds.

Our Prophet (peace and blessings of Allah be upon him) said: “There are no days that are greater before Allah or in which good deeds are more beloved to Him, than these ten days, so recite a great deal of tahleel,  takbeer and tahmeed during them.” [Ahmad]:

Tahmeed: Al-hamdu Lillah (All praises be to God)

Tahleel: Laa ilaha ill-Allah (There is no god but Allah)

Tasbeeh: Subhaan-Allah (Glory be to God)

Use these blessed days to seek forgiveness for all our wrongdoings.

It is Sunnah for the Muslim to fast on the first nine days of Dhul-Hijjah, because fasting is one of the best of deeds. In a hadith qudsi, Allah says: “All the deeds of the son of Adam are for him, except fasting, which is for Me and I shall reward for it.” [Bukhari, 1805]

The Prophet  said: “Fasting the day of `Arafah expiates the sins of two years: the past one and the coming one.” [Muslim]

Give in charity in these blessed days, as much as you can.

Maintaining the ties of kinship is from the best of deeds due to the saying The Prophet (peace and blessings of Allah be upon him): “Whoever would like his provision to be increased and his lifespan to be extended, let him maintain the ties of kinship.” [Bukhari]

And finally as Eid approaches, don’t forget to give your Qurbani.

The spiritual significance of Laylatul Qadr