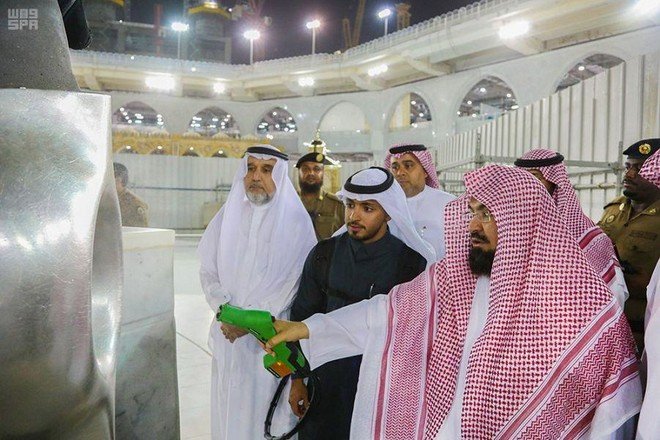 The chief sheikh of the Mosque of Al-Haram 🕋 and the General Predestination of the Mosque of The Prophet(M) Dr. Abdul Rahman al-Sadis has participated in the Qaba, especially the Hajar-e-Aswad, to prevent and prevent the spread of the new Corona virus. His video went viral on social media.


According to Saudi news agency SPA, the administration of the Mosque of Al-Haram has set up special teams to protect visitors from the new Corona virus.

These teams have been cleaning up a part of The Haram Sharif from one hour after the prayer of Asa, one hour before the Fajr prayer. The drug is being used to treat the germ. In addition, cleaning is being done at other times.

The administration of the Masjid-e-al-Haram said in its new statement that Dr.al-Saddis joined the cleaning of the kaaba and its courtyards around the city to encourage the cleaning teams. He also worked as a precautionary measure to crack the germs, to blow the floor of the Haram.

“The precautionary measures in The Majid-e-Al-Haram are being carried out to protect the visitors from the Coruna virus and to ensure their health and safety,” Dr. Al-Sadis said.

This work is of honor. This is a proud work. This will protect the guests of ALLAH. This will help them to avoid possible suffering. ALLAH SWT will reward him with a great reward.